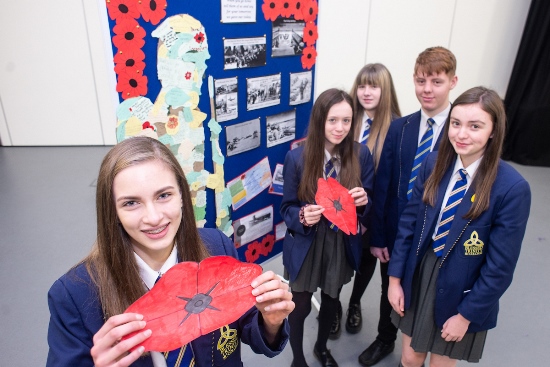 Phillip, Hannah, Eve, Eve  and Olivia were with pupils from Rochdale and Manchester as part of an award-winning initiative where students visit the battlefields and learn about WW1 before returning home to deliver a community-first WW1 project.

The five, along with Blessed Trinity history teacher Mrs Cheshire, a Senior Specialist Leader of First World War Education, went to the battlefields in France and Belgium.

They visited the Somme memorials, to judge the success of the battle that began 1st July 1916, and Neuve Chappell Cemetery, to consider the part played by the Indian Army, and more as part of their trip.

On their return they attended a Social Cohesion Conference in Manchester, a day organised by the University College London Institute of Education, who run the Battlefield Tours Programme.

“The content of key note speeches ranged from Muslims helping Jews in the Holocaust, to how the North West has welcomed refugees since World War One up to the present day,” said Mrs Cheshire.

“There were workshops on the peace process and also a drama workshop as part of the performance of ‘Journey’s End.’"
The group have put together a Legacy 110 Project exhibition which will be part of the Centenary Battlefield Programme.